Most Viewed Games on Twitch in 2021

Twitch is a leading live streaming platform. It receives on average 30 million daily visitors, who spend time viewing more than 7 million streams. Twitch live streaming has entirely altered the way we use video games for entertainment. Now many people get enjoyment from watching others play games rather than participating in the action themselves. While Twitch theoretically caters to most types of streaming, it’s no secret that game streaming is its lifeblood. Traditionally, most people have gone to Twitch to watch people play games and to listen to them commentate as they play. But what games do they watch most often? Are popular Twitch games the same as the top-sellers you can buy in a gaming store, or more likely online through Steam, EA, or another gaming company nowadays?

If you look at the following list, you will notice a surprising variety in the types of games played. Indeed a few of the top categories on Twitch aren’t gaming-related at all. You will see fighting games, sports games, battle royales, MMORPGs, and even gambling games.

Obviously, the popular games that streamers play on Twitch change over time, sometimes from day to day. Therefore, we have used Twitch Stats data to select the most popular games on Twitch during the current year, with data up to mid-July 2021. These represent the average viewers of a Twitch game. We also show overall rankings for those games that rank in Twitch’s All-time Top 50. 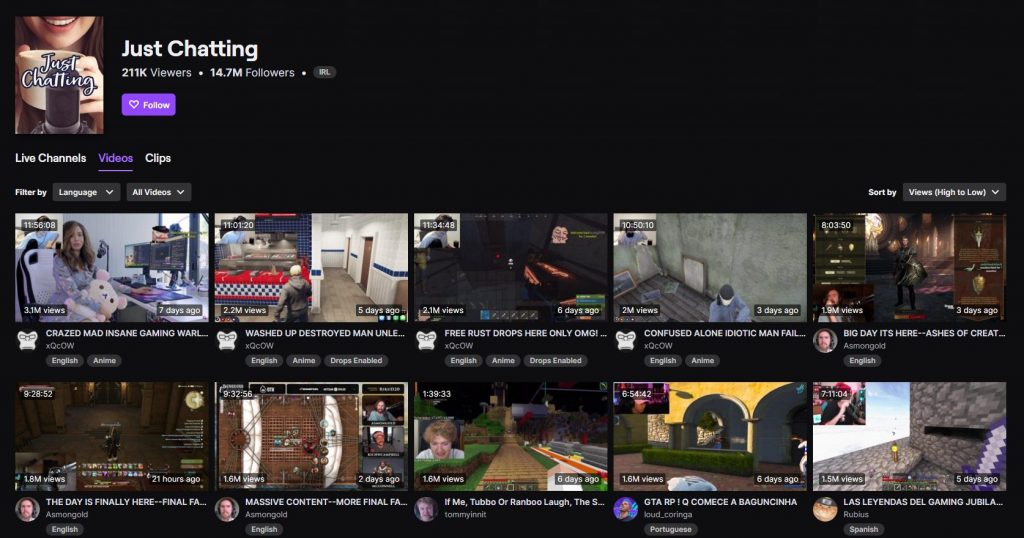 Somewhat surprisingly, we have started this list of most viewed games on Twitch with something that isn’t a game at all.  But the fact that “Just Chatting” is now the most popular channel on Twitch is too important to ignore. As its name clearly states, Just Chatting is about streamers chatting with their viewers rather than playing games.

This proves that Twitch isn’t just for gaming. Interestingly, it also emphasizes that Twitch is not just used by Western-centric teenagers. The top broadcast language in the Just Chatting channel is Spanish, followed by English, Korean, Portuguese, and Russian. 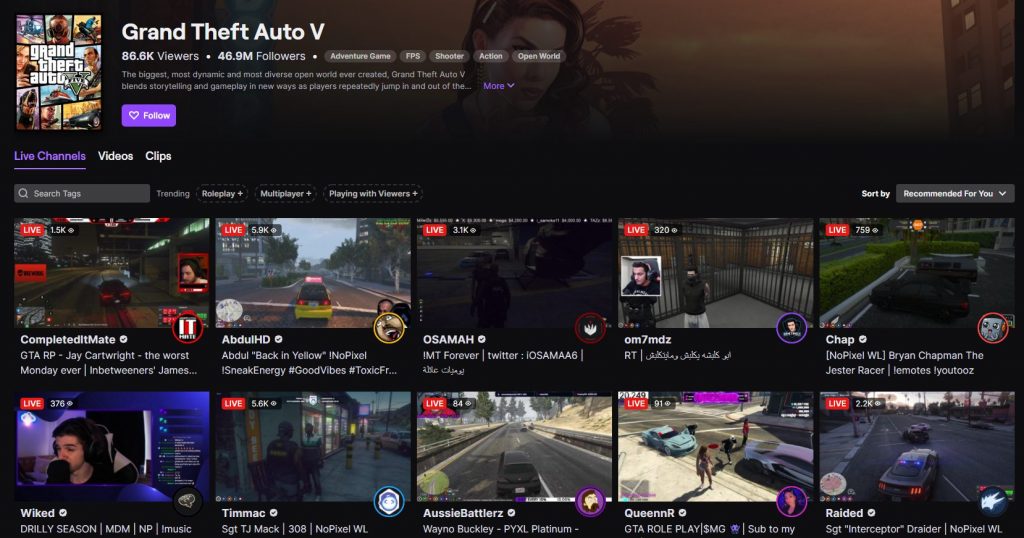 Grand Theft Auto V is a 2013 action-adventure game developed by Rockstar North and published by Rockstar Games. Set within the fictional state of San Andreas (based on Southern California), Grand Theft Auto Online allows you to explore its open-world environment and engage in cooperative or competitive game matches. 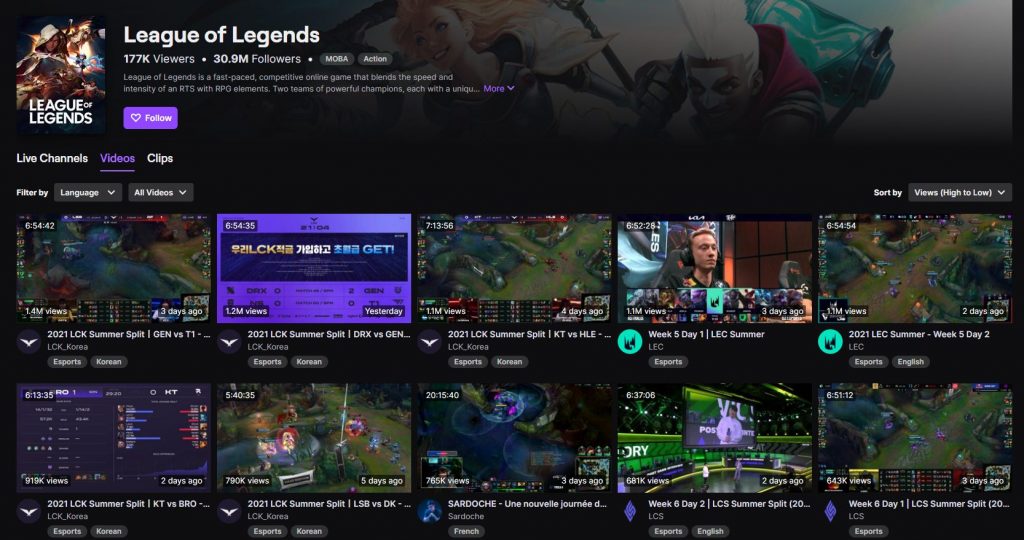 League of Legends (LoL), commonly referred to as League, is a 2009 multiplayer online battle arena video game developed and published by Riot Games. Two teams of five players battle in player versus player combat, each team occupying and defending their half of the map. 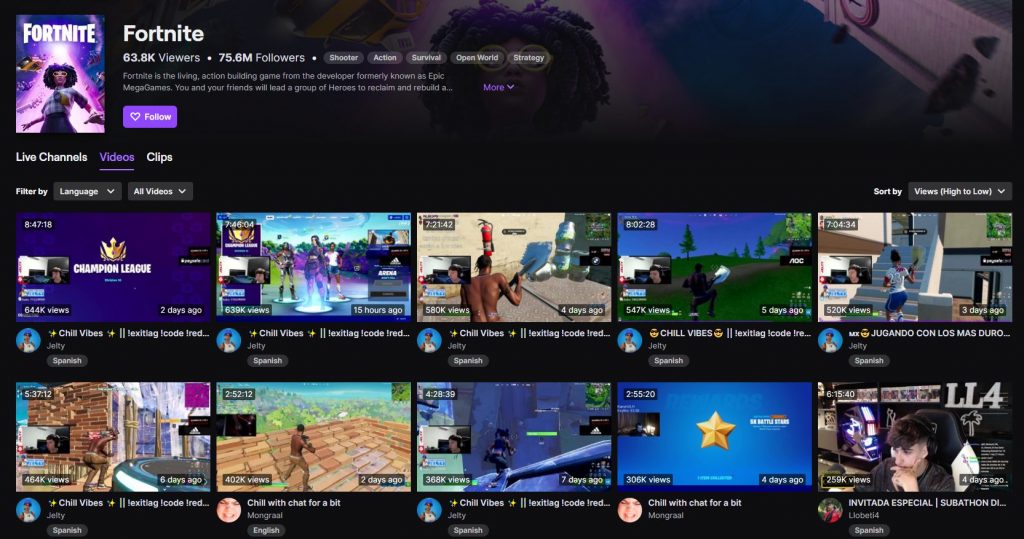 Fortnite is an online video game developed by Epic Games and released in 2017. Fortnite Battle Royale is a free-to-play battle royale game in which up to 100 players fight to be the last person standing. 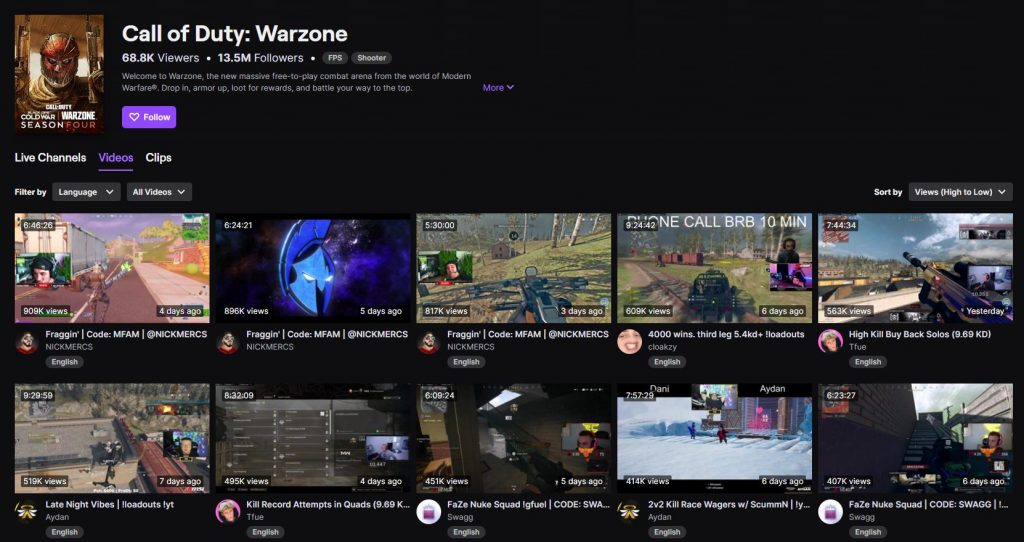 Call of Duty: Warzone is a free-to-play battle royale video game released in 2020 for PlayStation 4, Xbox One, and Microsoft Windows. The game is a part of 2019’s Call of Duty: Modern Warfare and is connected to 2020’s Call of Duty: Black Ops: Cold War. Warzone allows online multiplayer combat among 150 players, although some limited-time game modes support 200 players. 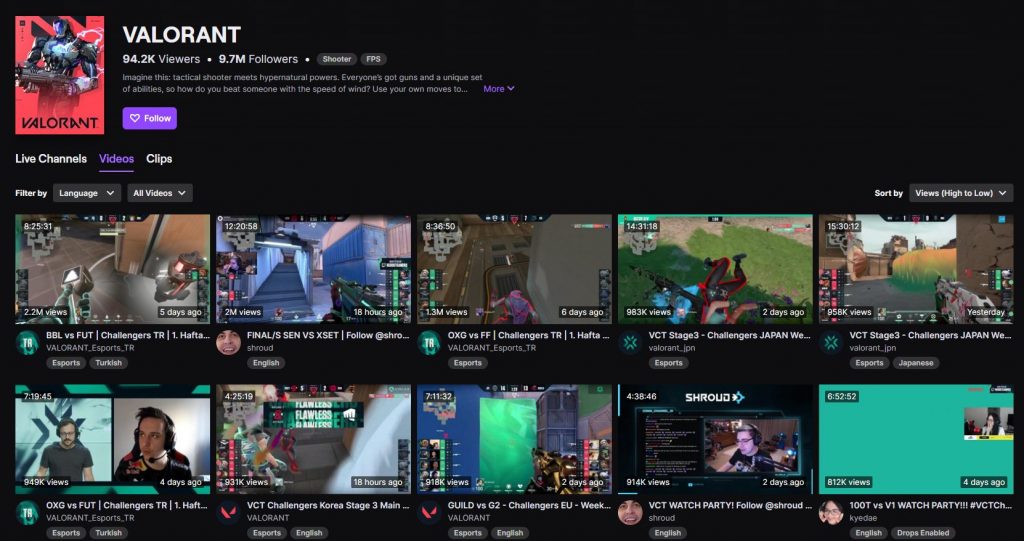 VALORANT is a free-to-play first-person hero shooter developed and published by Riot Games for Microsoft Windows. Players play as one of a set of agents, characters designed based on several countries and cultures worldwide. Players are assigned to either the attacking or defending team, with each team having five players on it. 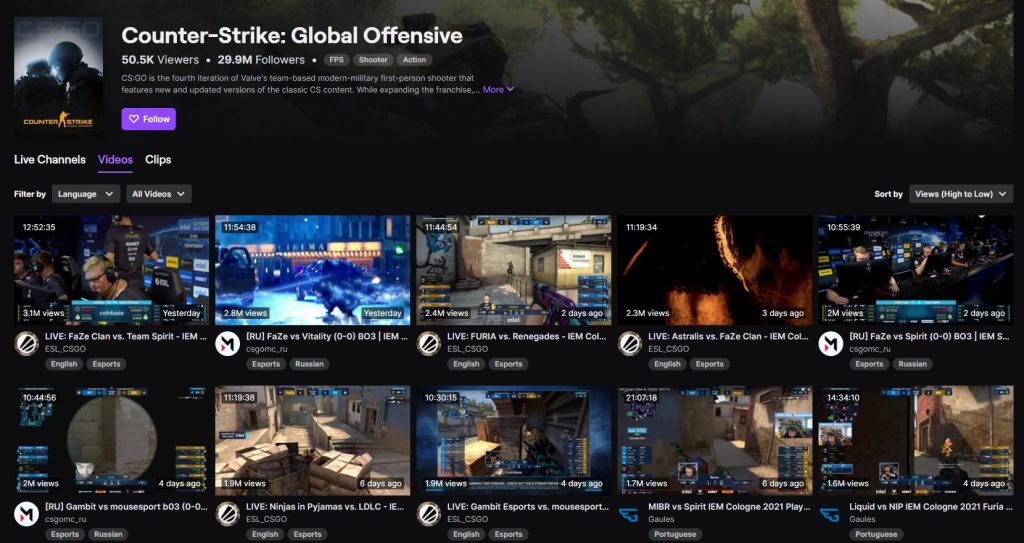 Counter-Strike: Global Offensive (CS:GO) is a multiplayer first-person shooter developed by Valve and Hidden Path Entertainment. It is the fourth game in the Counter-Strike series. Although it was first released in 2012, Valve still regularly updates the game, both with smaller balancing patches and larger content additions. 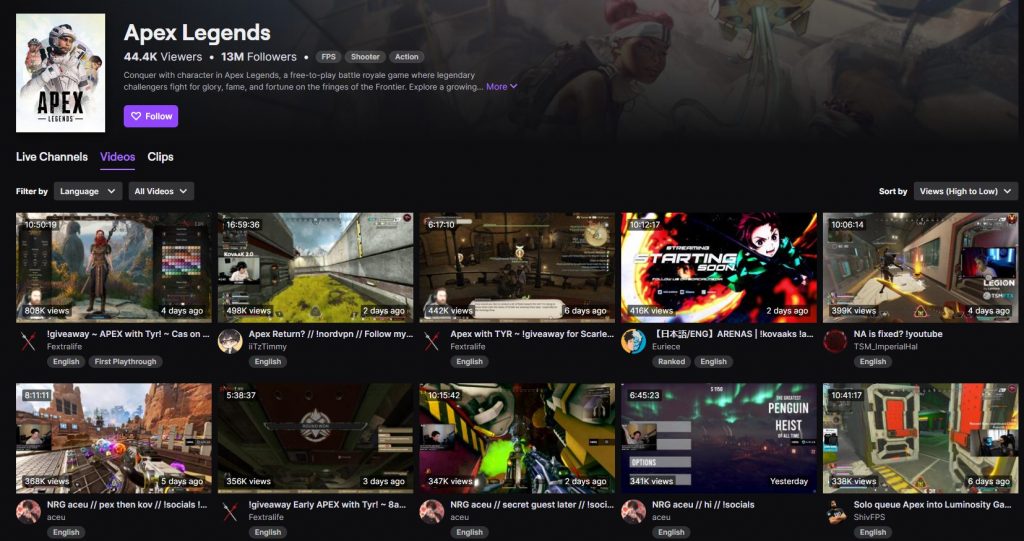 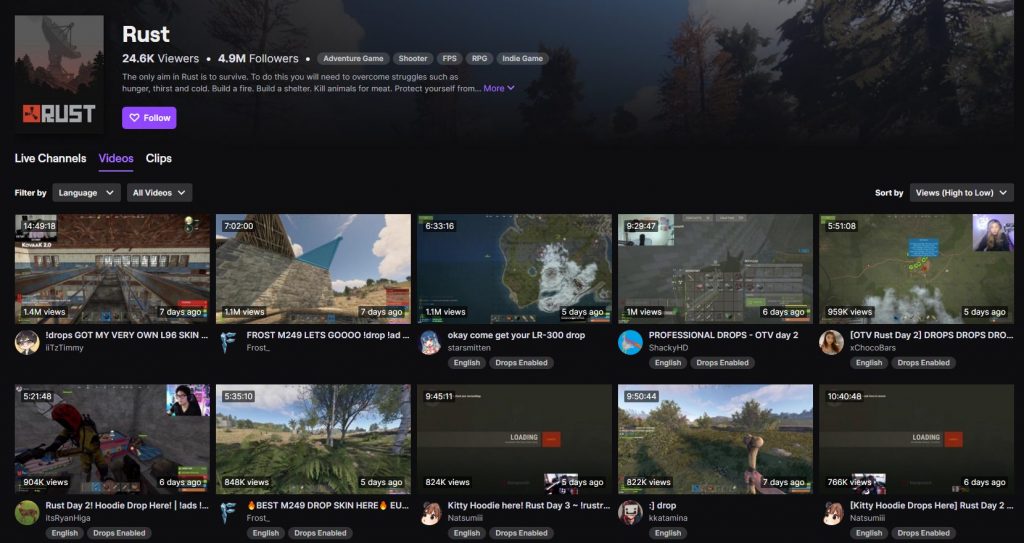 Rust is a multiplayer-only survival video game developed by Facepunch Studios. The objective of Rust is to survive in the wilderness using gathered or stolen materials. Players must successfully manage their hunger, thirst, and health or risk dying. 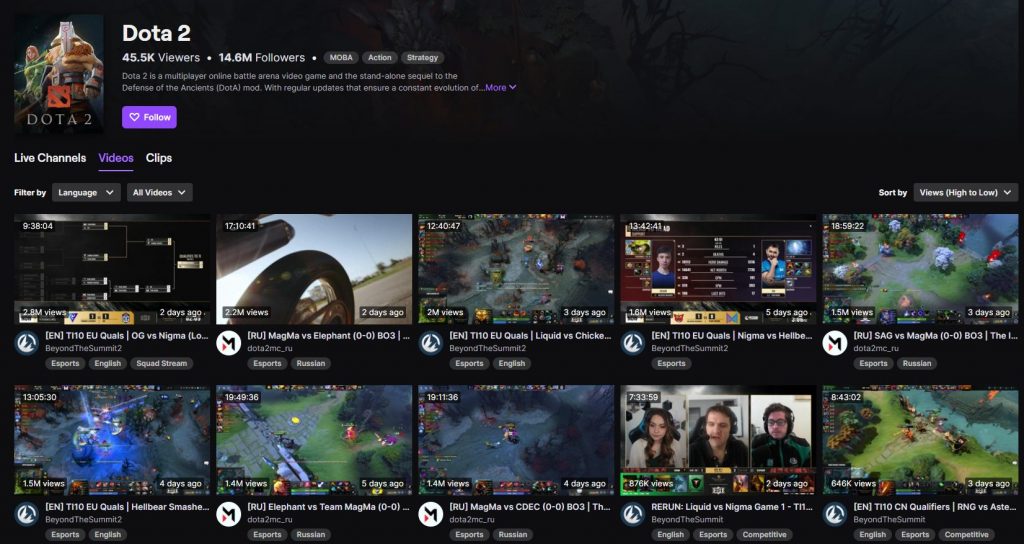 Dota 2 is a multiplayer online battle arena (MOBA) video game developed and published by Valve. The game is a sequel to Defense of the Ancients (DotA). Dota 2 is played in matches between two teams of five players, with each team occupying and defending their own separate base on the map. Each of the ten players independently controls a powerful character, known as a “hero,” all of whom have unique abilities and differing play styles. 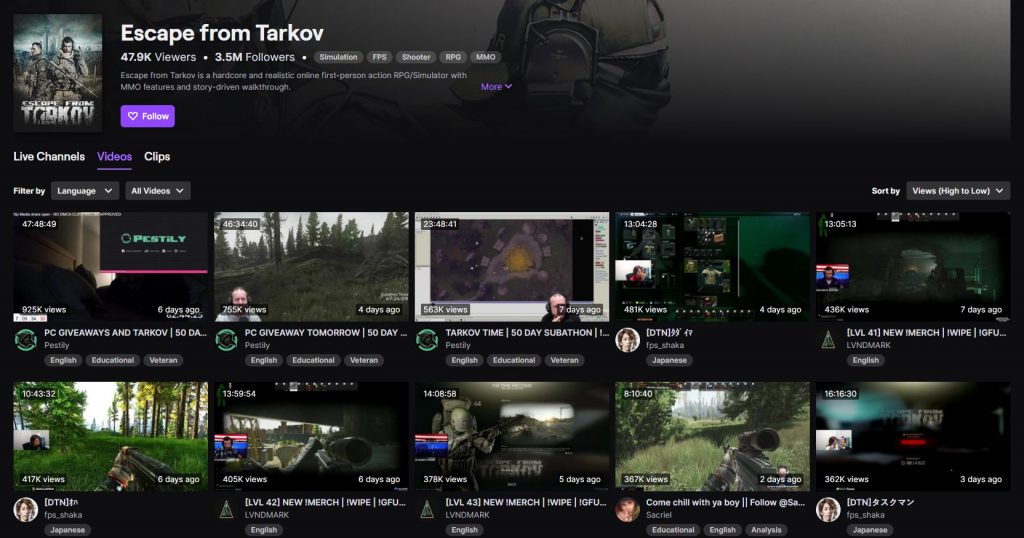 Escape from Tarkov is a multiplayer first-person shooter video game in development by Battlestate Games for Windows. The game is set in the fictional Norvinsk region, where a war is taking place between two private military companies (United Security “USEC” and the Battle Encounter Assault Regiment “BEAR”). Players join matches called “raids” to fight other players for loot and aim to survive and escape; dying results in losing all items the player used and found during that raid with only a few exceptions. 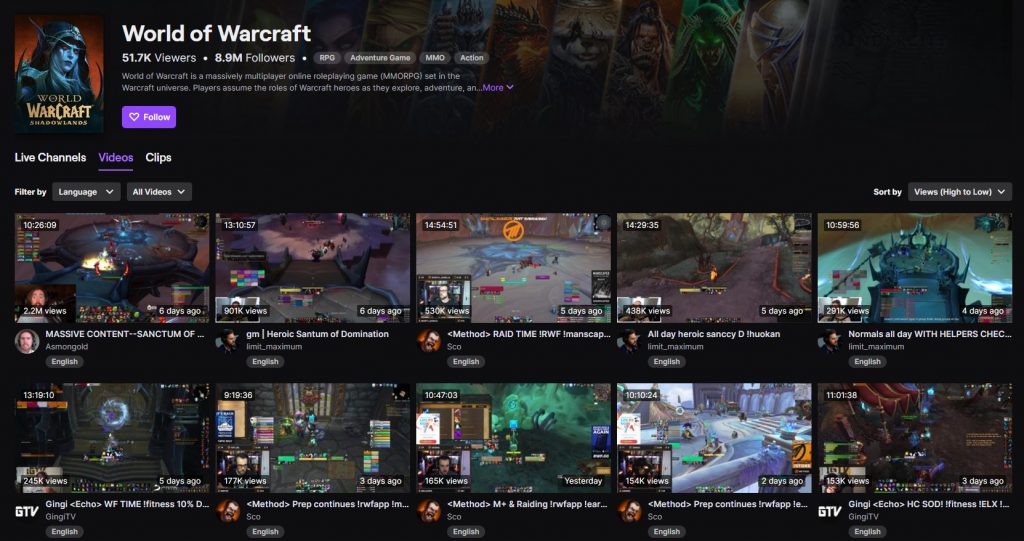 World of Warcraft (WoW) is a massively multiplayer online role-playing game (MMORPG) released in 2004 by Blizzard Entertainment. Set in the Warcraft fantasy universe, World of Warcraft takes place within the world of Azeroth, approximately four years after the events of the previous game in the series, Warcraft III: The Frozen Throne. World of Warcraft has had eight major expansion packs.

FIFA 21 is the 28th installment in the FIFA series, released on 9 October 2020. The game features more than 30 official leagues, over 700 clubs, and over 17,000 players. FIFA is a series of association football video games developed and released annually by Electronic Arts under the EA Sports label. 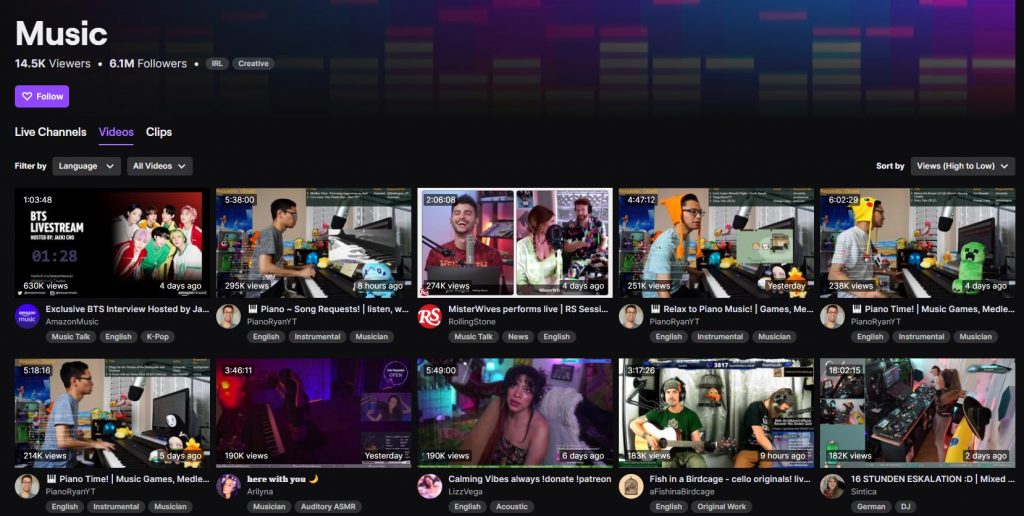 Twitch music channels are another non-gaming category. Twitch describes Twitch Music as being a place where music creators can share their art with a community of millions and build a place to connect with their most passionate fans. With Twitch, anyone can broadcast themselves live over the internet to millions of viewers. It has an amazing community of musicians – instrumentalists, DJs, rappers, singers, and music producers. Viewers can request songs, ask questions, and exchange ideas. 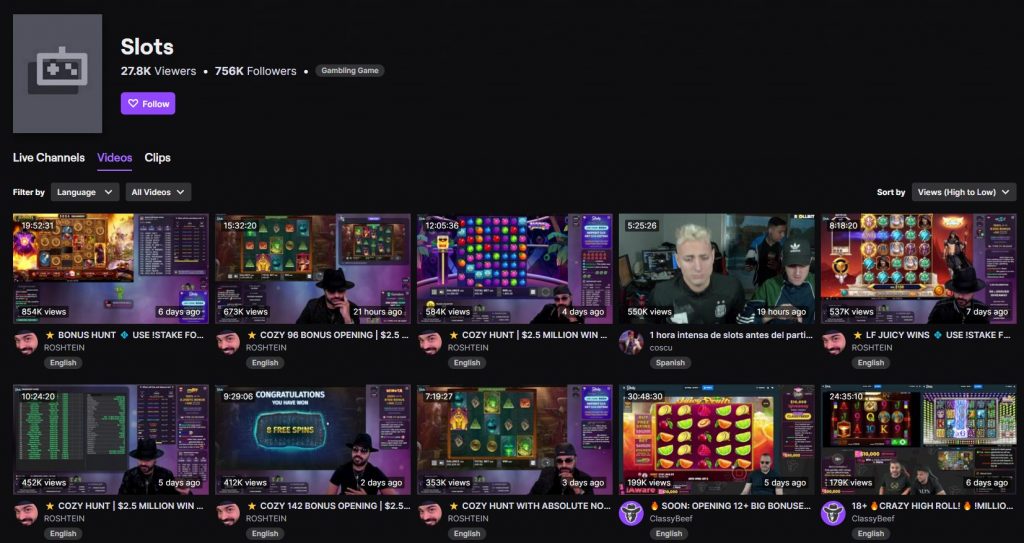 Slots is a section of Twitch devoted to gambling. In this section, streamers play a variety of online gambling games. Some of the streams are merely spinning slots with no voice commentary. One of the reasons for the popularity of this category is that it allows people to see how a game operates before they lose real money through not understanding game mechanics. 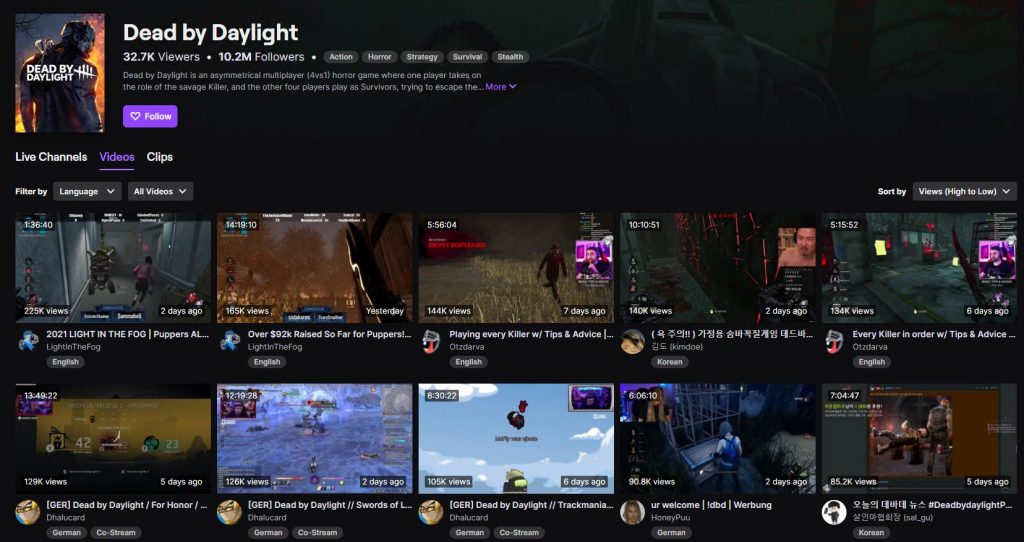 Dead by Daylight is an asymmetric survival horror video game developed by Behaviour Interactive. It was first released in 2016. The game is played as a one-versus-four online multiplayer where one player takes on the role of a savage killer and the other four play as survivors trying to escape the killer and avoid being caught and sacrificed to a malevolent force known as the Entity. 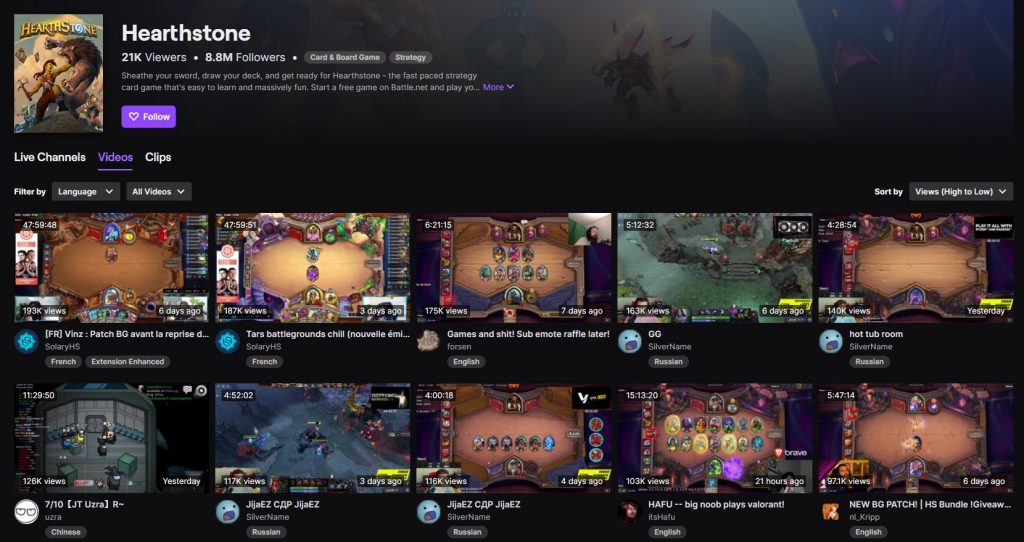 Hearthstone is a free-to-play online digital collectible card game developed and published by Blizzard Entertainment. It builds upon the existing lore of the Warcraft series by using the same elements, characters, and relics. The game is played as an eSport, with high-level tournaments such as Blizzard’s official World Championship featuring a prize pool of up to $1 million. 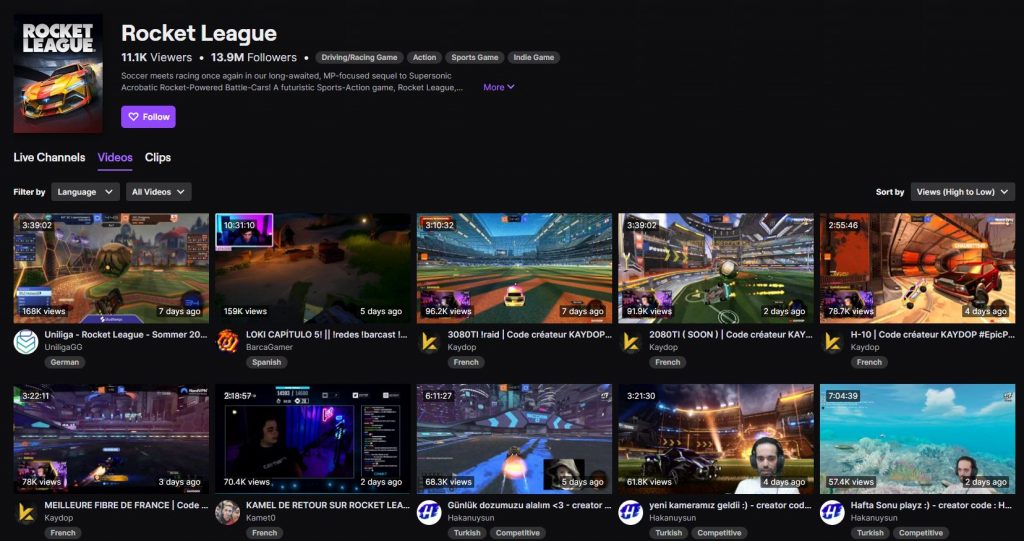 Rocket League is a vehicular soccer video game developed and published by Psyonix, first released in 2015. It has been described as “soccer, but with rocket-powered cars.” It has up to eight players assigned to each of the two teams, using rocket-powered vehicles to hit a ball into their opponent’s goal and score points over the course of a match. 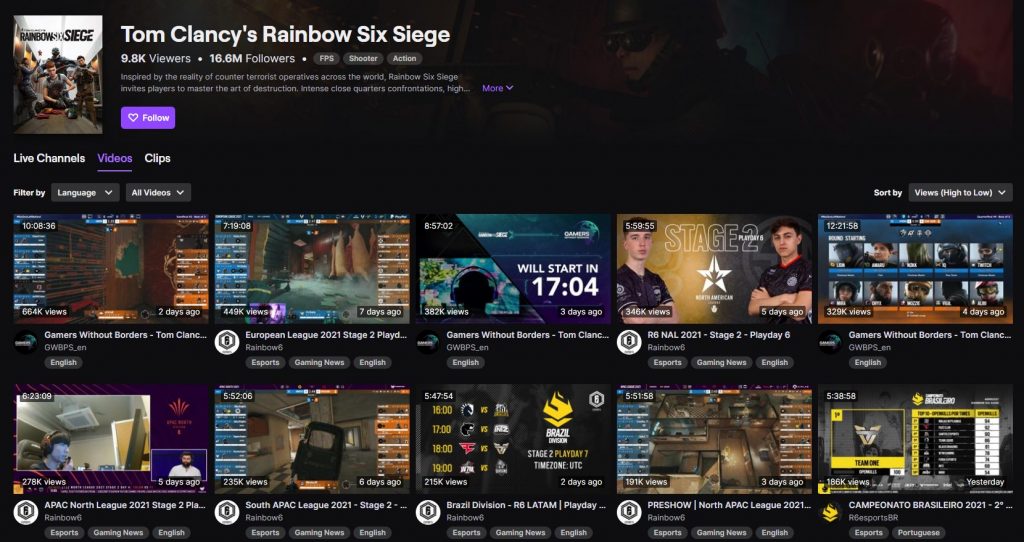 Tom Clancy’s Rainbow Six Siege is an online tactical shooter video game developed by Ubisoft Montreal and published by Ubisoft. The game puts heavy emphasis on environmental destruction and cooperation between players. Each player assumes control of an attacker or a defender in different gameplay m
odes, such as rescuing a hostage, defusing a bomb, and taking control of an objective within a room. 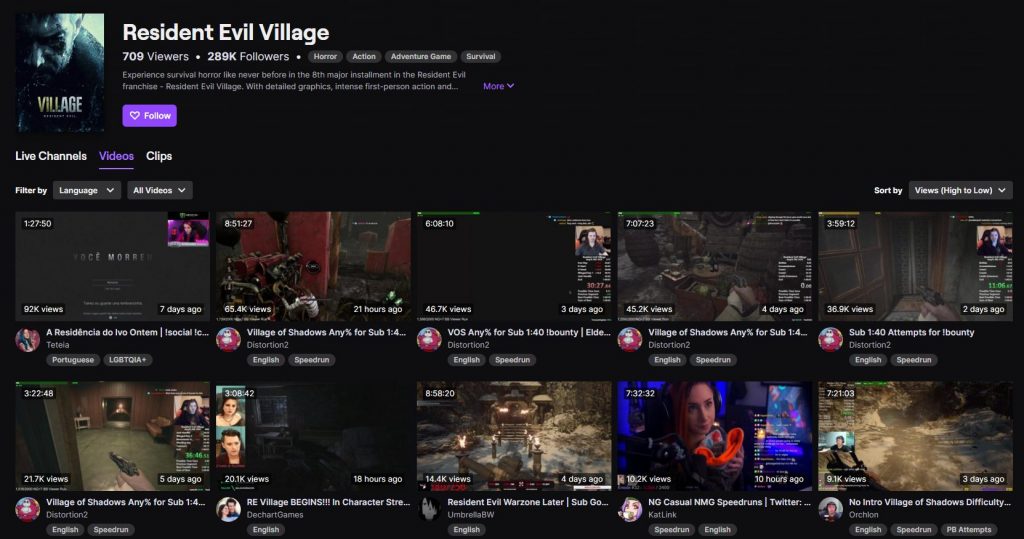 Resident Evil Village is a first-person survival horror game developed and published by Capcom. It is a sequel to Resident Evil 7: Biohazard. The game now features a recently released online multiplayer mode.