Wondering if Facebook is worth investing in as a marketing and advertising platform? Check out these Facebook statistics before you make your final decision.

Facebook is one of the most important social media marketing sites in the world owing to a huge user base. Even though it has been 16 years since its launch, the platform is still growing in popularity among both individuals and businesses. This makes it an integral part of most marketers’ social media marketing plans. And, if you still doubt its capabilities as a marketing channel, then these statistics will definitely change your mind. In this post, we will list 28 Facebook statistics that you should know in 2021. So, let’s get started.

Here are some statistics on Facebook’s revenue, reach, and the number of employees.

Facebook has offices in 70+ countries around the world. It also has 15 data centres globally.

There are over 48K employees working in different offices on Facebook around the world.

Facebook had over 2.6 billion active monthly users, as of Q1, 2020. This makes it the biggest social networking site in the world. Also, the number of users almost doubled in the last five years, clearly indicating that it is still popular and relevant. 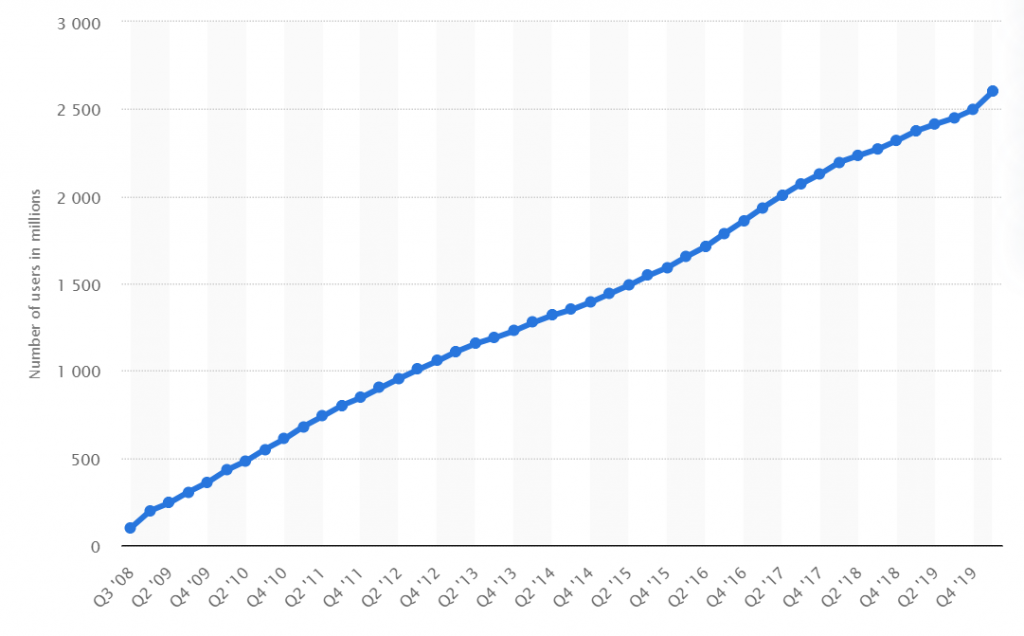 A look at the top countries ranked by the number of Facebook users shows that it is quite popular in Asia. 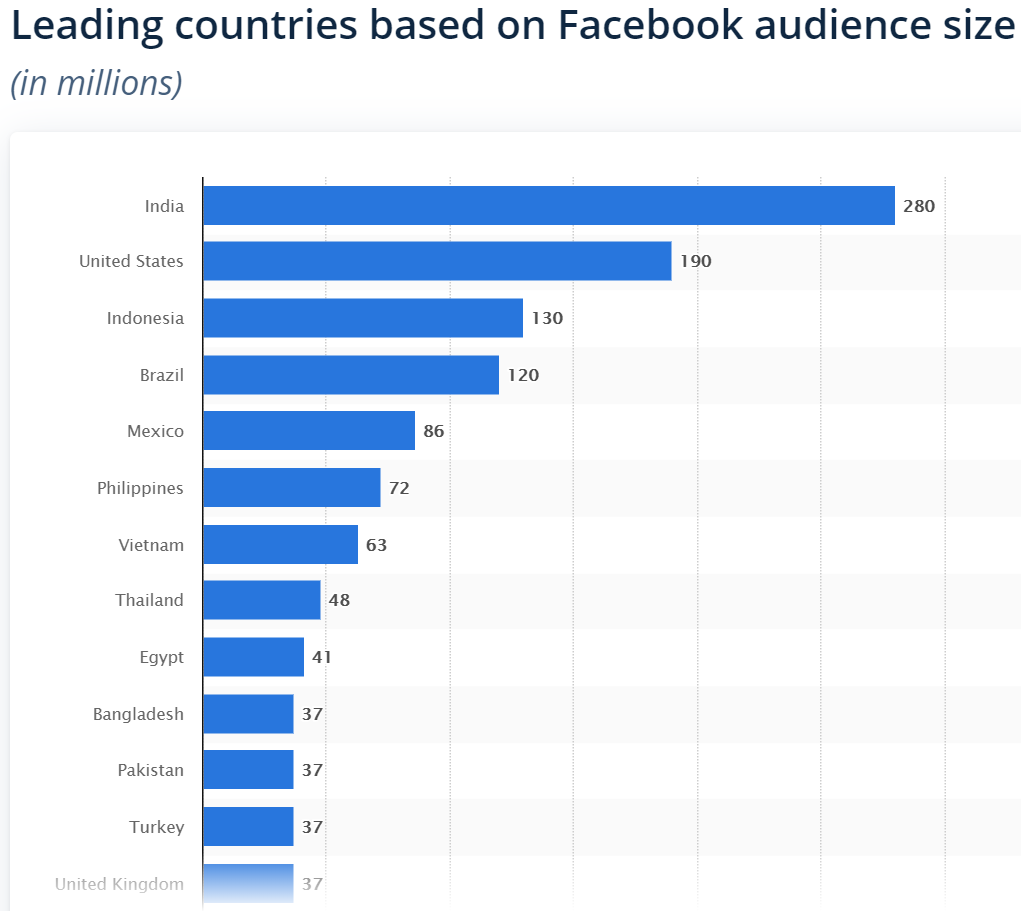 This indicates that Facebook is popular among young and middle-aged people, but not as much with teenagers and older people.

56% of the global Facebook users are male while 44% are female.

As of Q1, 2020, over 1.7 billion people use Facebook daily. These represent ~67% of the monthly active users of the platform, showing that most users of Facebook are active users. 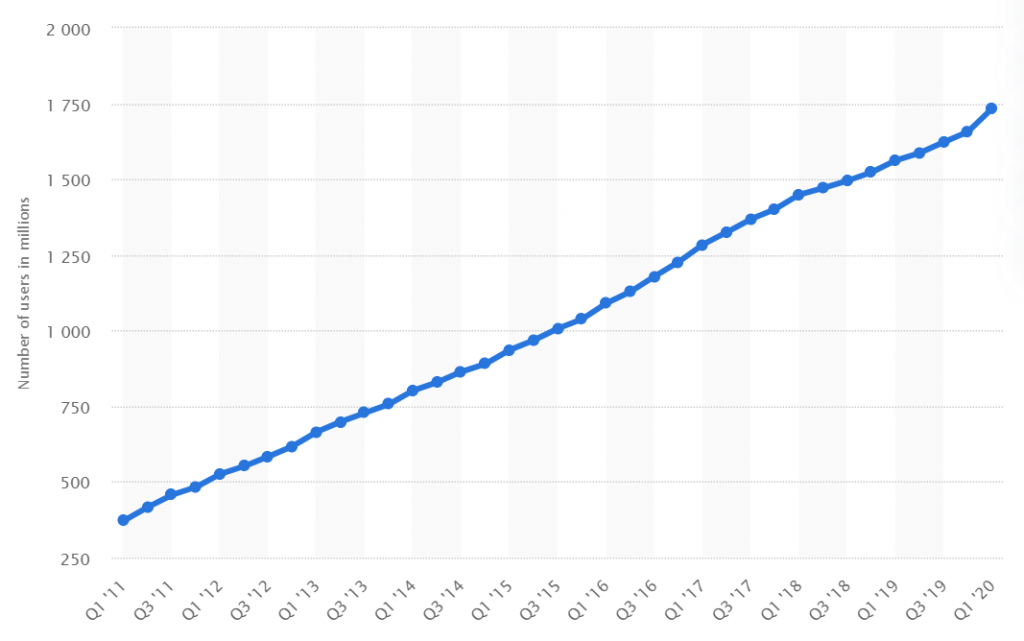 According to Facebook, users share over 100 billion messages on a daily basis. Also, the number of Stories shared on the platform is over 1 billion.

78% of Facebook users access the platform using only their mobile phones and 20% use both mobile and desktop devices.

What marketers can learn from this is that they need to make their Facebook content and ads mobile-friendly. 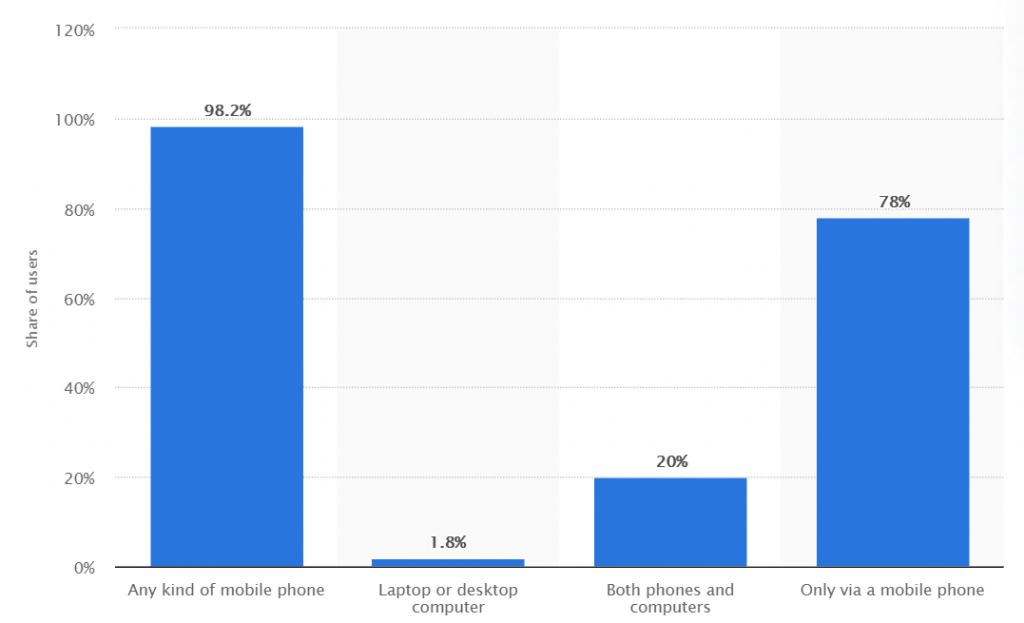 Facebook is an important social media marketing platform for businesses. In this section, we will list statistics that relate to the business use of Facebook and give you reasons to use it for business purposes.

According to Facebook, there are over 140 million businesses on the platform. This shows the importance of the platform as a sales and marketing channel for businesses. They use it for advertising, promoting their products or services, engaging with their customers, and more.

However, this also means that it is not easy to compete for audience attention on this platform and you need a solid Facebook marketing strategy for that.

12. Most Popular Brands on Facebook – By Number of Followers

As of February 2020, Samsung was the most popular brand on the platform, after Facebook, with over 160 million fans. The other popular brands on Facebook are shown in the image below. 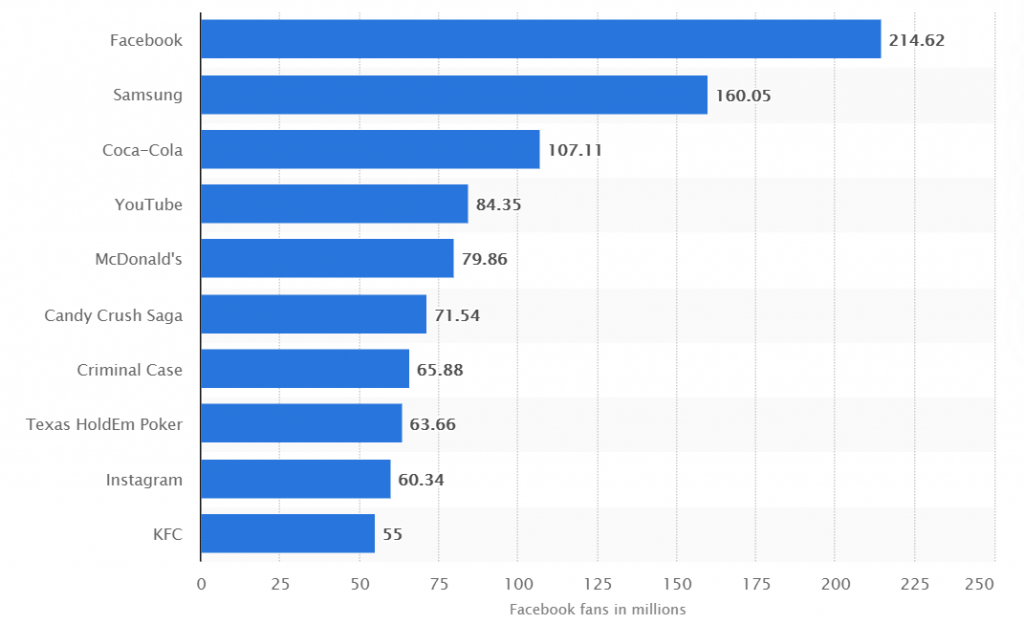 According to data from Statista, videos are the most popular type of content on Facebook. Videos get a high engagement rate of 6.15% compared with status posts that get only 1.3%.

Data from another report confirms that videos are definitely the most popular type of content on Facebook and get the highest engagement rates.

This means that any marketer who wants to use Facebook for business purposes should have a strong focus on video content.

This increase in revenue was caused by a 33% increase in the number of ads placed on Facebook in FY2019.

According to data from Facebook, users spend an average of 1.7 seconds on a piece of content. They can recall it for a further 0.25 seconds.

This means that marketers have less than 2 seconds to draw the attention of Facebook users and engage them. For advertisers, this means that they need to captivate their audience and get them to click on ads within 2 seconds.

The best way to do that is to make your posts and ads visually appealing, as people tend to like visual content better than text.

As of April 2019, there were over 10 million groups on Facebook with over 1.4 billion people using them.

The US is the local market for Facebook, even though it is behind India in terms of the number of Facebook users. Given that the platform started here, let’s look at some of the Facebook statistics on the usage of the platform here.

The second and third positions are reversed for the global audience. This indicates that Facebook is comparatively less popular among younger people in the US when compared with the global average.

54% of Facebook users in the US are females, while the rest 46% are males.

This is in contrast to the global average of more men using Facebook than women. 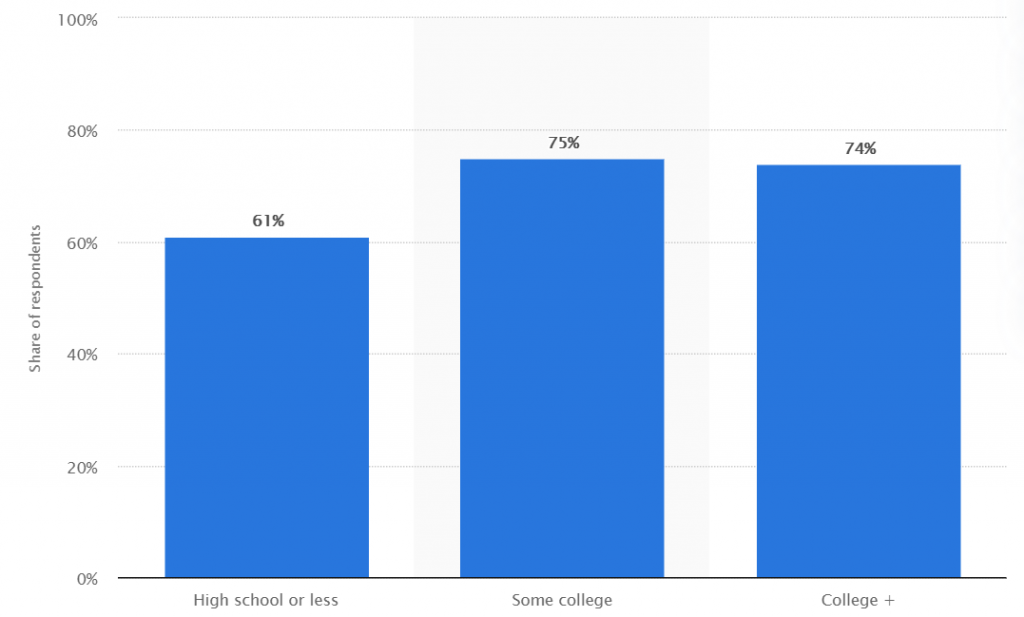 According to a survey of Facebook users in the US, these are the most popular reasons why people use the platform.

Most people use Facebook simply to stay in touch with their family and friends. 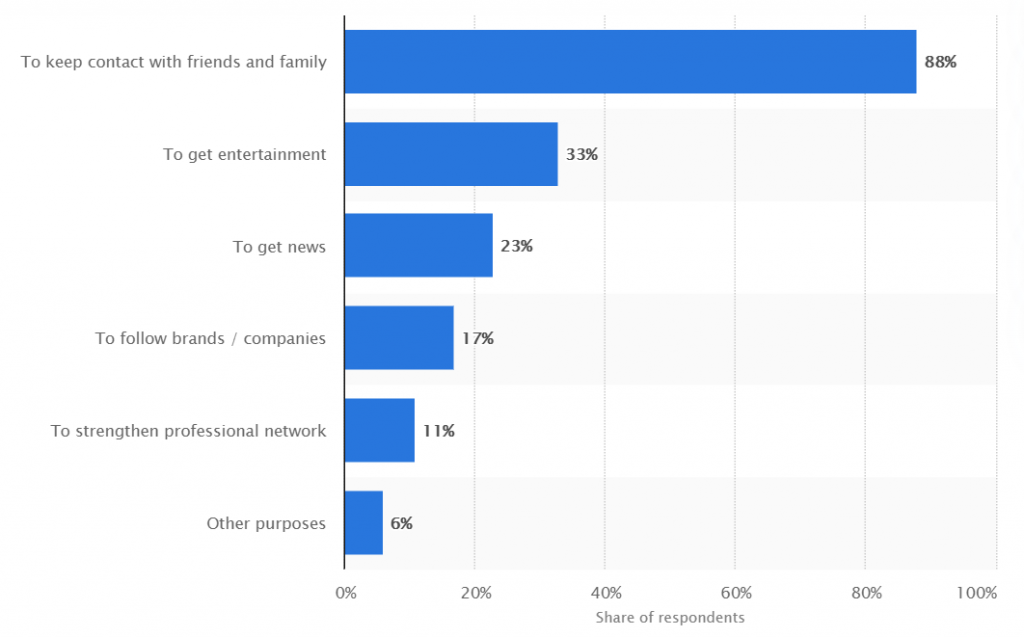 Facebook Messenger is an important part of many marketers’ social media strategies and deserves a special mention. Here are some statistics related to it:

Facebook Messenger is the second most popular messaging platform in the world, after WhatsApp. It has over 1.3 billion monthly active users, as per the last update.

Here are the numbers for other popular messaging apps: 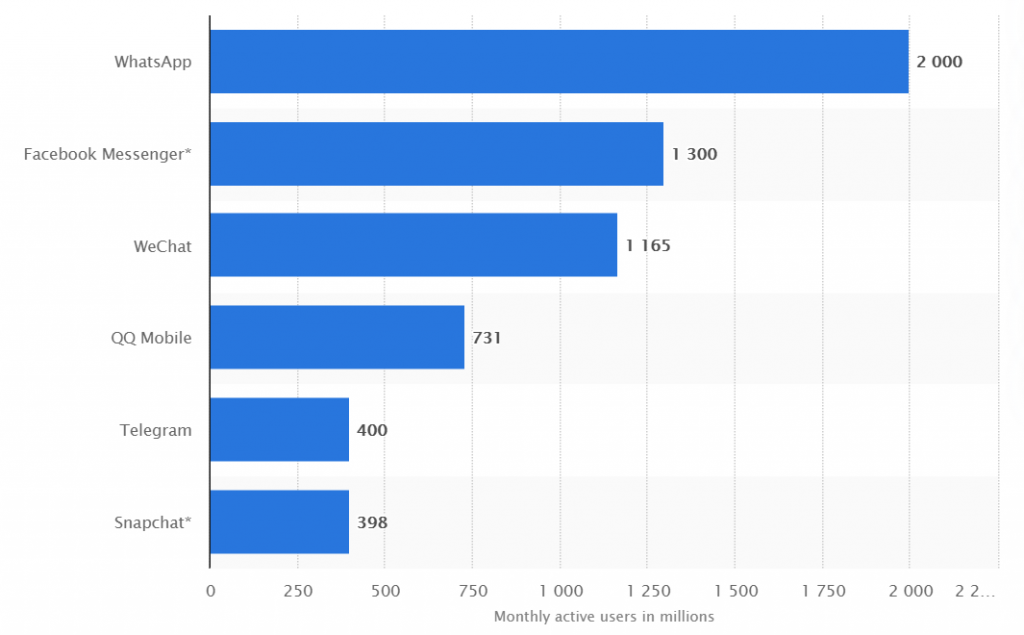 In 2018, Facebook Messenger had 126.3 million users in the US who accessed the app using their mobile phones. This number is forecasted to reach 138.1 million by 2022.

As of 2018, Facebook Messenger had over 300,000 active chatbots, responsible for the exchange of over 8 billion messages between people and businesses.

Facebook is and will continue to be an important social media network for both individuals and businesses. Use of Facebook for business purposes has been steadily increasing and if you haven’t joined the bandwagon yet, it’s high time that you do.

what is the d” layer?

what kinds of animals once lived on the prairies